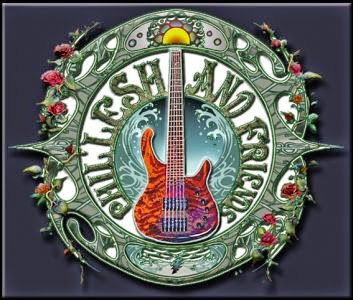 Recorded and transferred by Larry - FLDEADHEAD.
Mastered by Alex Ford.

- EAC and mastering by Alex Ford.

- *= lowered to 8 feet halfway thru set 2 per request of IClips cause my Mics were on the screen shots.

as I was dead on Phil's Mic. Was funny seing my Mics up on the screens on Phil's stomach...lol

Highlights abound; all of set 1 rocks, but the real goods start with that New Speedway > Hard Rain. The latter is really quite a surprise - listen to Jackie Greene handle the final verse of the song, esp. those here grumbling about the vocals in general. Too many times Dylan songs are played as a matter of course by too many bands (incl. Dylan himself); here they make this old classic sound brand-new.

Unbroken Chain has a jam in the middle that absolutely, SERIOUSLY *commands* your attention, and all that Telstar stuff takes us out to the galaxy's edge (but ZERO stars for that dude who insists on talking through the damned thing - goes to show that no matter how good taping technology gets, you still can't account for those with serious attention-span deficits.)

Reviewer: danger3ooo - favoritefavoritefavoritefavoritefavorite - June 2, 2008
Subject: whole set sick!
this show was so dope its by far the best phil show ive seen in recent years and yes jackie green(e) fucking killed he is more than just a breath of fresh air this kid sounds like he played with the dead 20 years ago and has been doing so ever since. great harmonics great vocals certainly improved by phil too. the jackie song on here, Just Wandering is absoloutly sick and you can hear the new melodic sound of the band on the Wheel and Uncle Johns. i mean A Hard Rain's Gonna Fall are you kidding me it was so fucking sick cant wait for Bonnaroo!

-BMF (Gratefully a listener since 1966)
Reviewer: Albix - favoritefavoritefavoritefavoritefavorite - March 15, 2008
Subject: New vocalist?
This is Phil Lesh & Friends. You expect amazing vocals? Which Phil Lesh have you been listening to sing all these years? Besides, this band has been RIPPING IT UP since September! This is a great performance and a very solid recording. Jackie Green is an incredibly talented breath of fresh air and if you don't think so, go and listen to the Nokia run that's also on this site. Just listen :)

OH, and HAPPY BIRTHDAY PHIL!
Reviewer: supahj - favoritefavorite - March 15, 2008
Subject: Good jams, flat vocals
Id love to see this band adda really good vocalist. The jams are good and Phils playing is second to none. His vocals just take me out of the game so much though-hes just flat- it doesnt sound good its just too much.

jackie green, folks!!
kept hearing that around the crowd. everyone was obviously impressed.

the band was tight, jazzy, and well rested. the 30 minute headcount commercial in between sets was really offputting, though, and i think made people lose interest. the second set was amazing, but it didn't get the energy from the crowd it deserved.

*a mellow help on the way > an awesome slipknot really got the juices flowing. sage-burning guy was spinning really really fast.

*i'm sad casey jones didn't get the crowd going enough to keep the house lights off. buzzkill. i still blame the commercial.

i have to amend my comment on the headcount commercial (and it WAS a commercial). people in the jam band community are ambivalent about politics, but no more than the rest of the general population. in fact, i would wager that jammers and heads probably feel MORE passionately about politics than the general populace. it's just that when you go to see a phil show, you want to be rocked... though my face was surely stolen, the 30 minute interlude took something away from the entire experience.

it could have just been the drugs, though...

love you guys!
~j
Reviewer: bigmike4 - favoritefavoritefavoritefavoritefavorite - March 14, 2008
Subject: Great show!
The whole show was really great except for the trip into outerspace. That really went on for far too long. Viola Lee and Golden Road were great. The Headcount movie in between sets was not bad at all. I really pisses me off that people in jam band community are so passive about voting/politics.
Reviewer: Scott420DL - favoritefavoritefavoritefavorite - March 14, 2008
Subject: Once again Phil and Friends delivers the goods
Well I wasn't at Langerado for the full 4 days as many people were, but I was luck enough to be there Sunday to see Gov't Mule and of course Phil. I was awestruck from the moment the lights went down. Jackie Green tore it up on guitar, especially in the second set during Golden Road and Viola Lee Blues. And when they broke into Unbroken Chain, I about fell over. FANTASTIC! The crowd energy was a little subdued, probably just from sheer exhaustion.

I think my only disappointment was that I expected Phil to invite some "special guests". Warren Haynes for one. Unfortunately that never came to fruition. Still the show was amazing from start to finish. Every song was tight. The band appeared to be enjoying themselves. I also liked the fact that no matter where I was in the crowd, I was always in the Phil Zone.